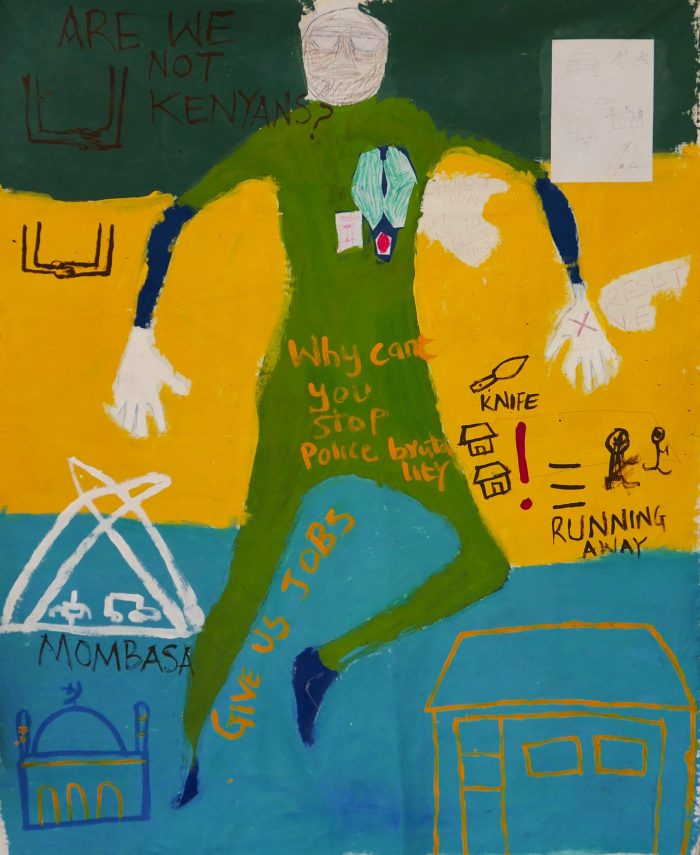 In my body map, I’m trying to show a person praying represented by the two hands meeting and in green. With hope and prayer, everything will be possible. The one with the red dots represents saying no to the bloodshed e.g through terror attacks.
Next to it, there are three people holding each other’s hand and putting their feet together and there I wrote acceptance. We need to accept each other irrespective of race, color, religion, tribes and etc. so that we can shun violent extremism.

The green inside my body has no particular meaning. My two arms and hands in yellow background are representing welcoming others. The people of Mombasa should be more welcoming. The two arrows (horns) in white show the entrance to Mombasa. Below is the Mosque that I go to. The Mosque is important to me because I was born a Muslim, and brought up in the Muslim ways. The Mosque I go is good, we are told to do good things and ignore the bad things. We are also told that when you see a bad thing try to tell the person doing it so. If he insists on what he is doing, the right thing is to leave him alone.
This is the technical University of Mombasa where I study. The University is a good place for me. Mombasa is a very good place as a city. I find the place so beautiful, and people help each other. The exclamation mark, the knife and the two houses, this is about insecurity. There are places in Mombasa where I wouldn’t necessarily go. I have drawn here a shape of the house, then someone running away. This place is in Kisauni, there’s a gang group there and even the residents fear it. Two weeks ago, some students were slaughtered there. That place is not quite safe and most of the students are living there because it is very cheap. The lifestyle there is cheap. Another place I don’t like going is in Likoni, where also there’s a gang which usually slaughter people for petty things like phones and sh.50. Those are the two places that are a no go zones.
I wrote the words ‘Are we not Kenyans?’ Here I am trying to ask the Government why they are marginalizing us? Why are they not giving us jobs? Many youths graduates are unemployed yet the Government employs a 91 year old retiree.
Many regard us Somali as Alshabab. That perception exists. You may be at a certain place and someone from nowhere would just call you Alshabab as if that is your name. I remember I was walking in Nairobi and the Police stopped us and asked us to produce IDs. They also asked whether we knew Swahili. We told them we were born in Kenya and we know Kiswahili. I even answered them in Kiswahili. Then they left us.
Inside the body I have also written ‘Why can’t you stop Police brutality?’ although has not happened to me I hear many of such stories in Mandera and even here in Mombasa. Police just abduct a person without any clear reason and the person disappears. Police brutality I can link it to violent extremism because I heard that here in Mombasa some were arrested for no apparent reason just because someone pointed them out as Alshabab and the Government without any further investigations abduct a person and take him to an unknown place.
This project opened our minds, like we can draw our feelings in an artistic way. I think people can learn a lot from my painting. They can learn that I’m unemployed, also they can learn that there’s police brutality here, they can learn of some dangerous places in existence. Art is a very special tool for social change. It can be transformative to the community. It can point out clearly, to the problems in society and hence bring back that sense of direction. Although the Government is not able to find us jobs, it is their responsibility to create them. The artistic approach to research is the best way as compared to interviews.