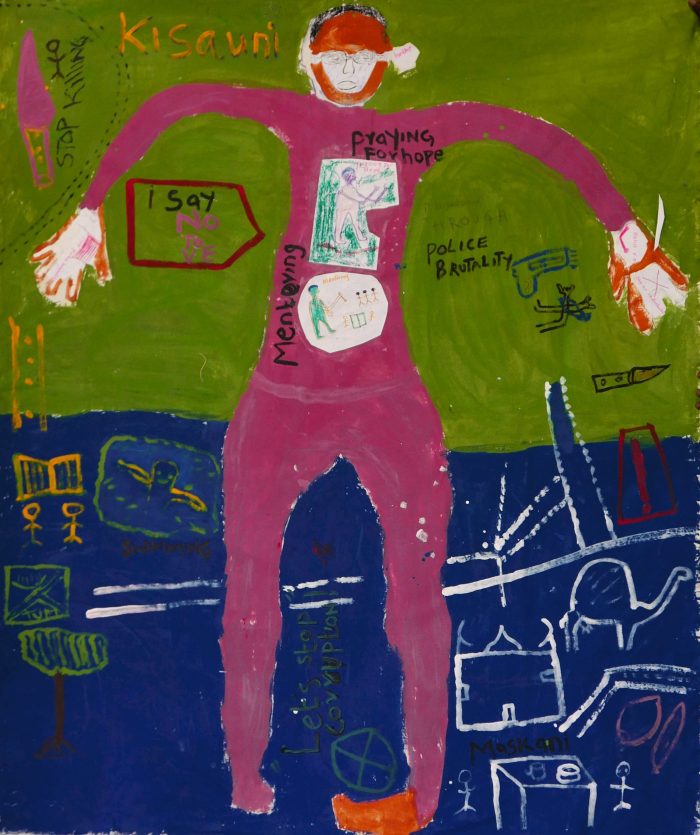 No, to violent extremism

The message I want to tell my audience is that this painting is to ‘pray for hope’. In Kenya, people especially those close to the border with Somalia, especially in Mandera,  live hardships because of terrorists, police brutality, corruptions and tribalism.

For me violent extremism is ‘the violations of human rights’ e.g  I’m not willing for a curfew to be imposed in Mandera. To me that is a violation of rights. Violent extremism is something that is a threat to human life. They are the threats like from Al Shabaab, post-election violence, Police brutality, MRC in Mombasa that has brought disunity and war in the county…The other one is the terrorism. Now terrorists some are in Kenya and others live in Somalia but they have sympathizers. When they are attacking a certain area, it is like they have studied that area for a long time. Al-Shabaab they don’t differentiate people. If you are in a certain area and they come to bomb that area, they just don’t care that is why I fear them for they are a threat to human life. You are a neighbor to a people (country) where there’s no Government. There are many attacks there; vehicles explode, without security there’s no public transport going there because of explosives put under ground.  That can bring insecurity in people lives. Even if you see a stranger and he even asks for a phone to call say his brother you won’t give, there’s no trust. People trust nobody because of the insecurity by the terror groups.

Police brutality happens when there is an attack in certain area. The Police don’t think outside the box they just beat and punch anyone on the streets. If it is like in Mandera, in the next one hour you’ll see all people beaten and taken to jail. For me what has really affected me are the Police and the Alshabab. With the Police whenever there’s trouble it is like I must produce my identity, hence walking with my ID card wherever I go. In some parts it is not easy to get an id card. Some people are in their 7th year waiting without having gotten their ID cards. When there’s insecurity in certain areas and the people living there are very innocent, they are not the ones who caused the violence, like in Ramlal there was a curfew there, they said there was insecurity and people were complaining, everyday praying. Now imposing a curfew that at 5:00 p.m there’s no business going on, if your mother or sister is in labor pain you can’t take her to hospital, now that is a violation of rights, because there was loss of life.
For me the curfew and harsh rules imposed by the Government and the Police, mistaken identities by the Police, detention without reason, all these are violent extremism for me.

In my body map, the position of my body is that of someone resting. The background is blue since Mombasa is surrounded by water. The green background is for the outside country. I used brown to represent my skin colour.
The person inside my body is me mentoring kids and students about radicalization. My hands are praying for hope, so that the radicalisation and hardships will one-day stop. I love mentoring.
On the right top side of my painting outside my body, there is Kisauni. In this area, there are many gangsters causing a lot of insecurity. Underneath Kisauni is a road going to the university and a tree. The two people represent my friends. This is just like Mombasa because in Mombasa I stay with friends and they are my group influencers. We always advice about goodness, read and share good information and bad information like about terrorism which we condemn. We are all Somalis. We share culture, we eat together, we don’t disagree much, and when we are very few in an area we love each other.
On the left side of my body map, there is the mosque where I pray and my Somali pastoralist community. This is the Maskani, where I live in Mombasa and where I meet with friends, have tea, and talk about politics.
In white I drew the bridge heading to Likoni because it where I lost a friend. He was stabbed by a gang and killed on the beach. That is why I drew a knife with the red exclamation mark symbolising danger. The handcuffs and the gun near the bridge represent police brutality and extrajudicial killings. At the bottom, between my legs I wrote ‘let us stop corruption’ since corruption is causing so many hardships in Kenya.
The experience throughout this process was good. I learned that feelings and hardships can be better expressed through art than writing. I also learned the advantages of teamwork. By thinking and learning how to work together, I was able to share.