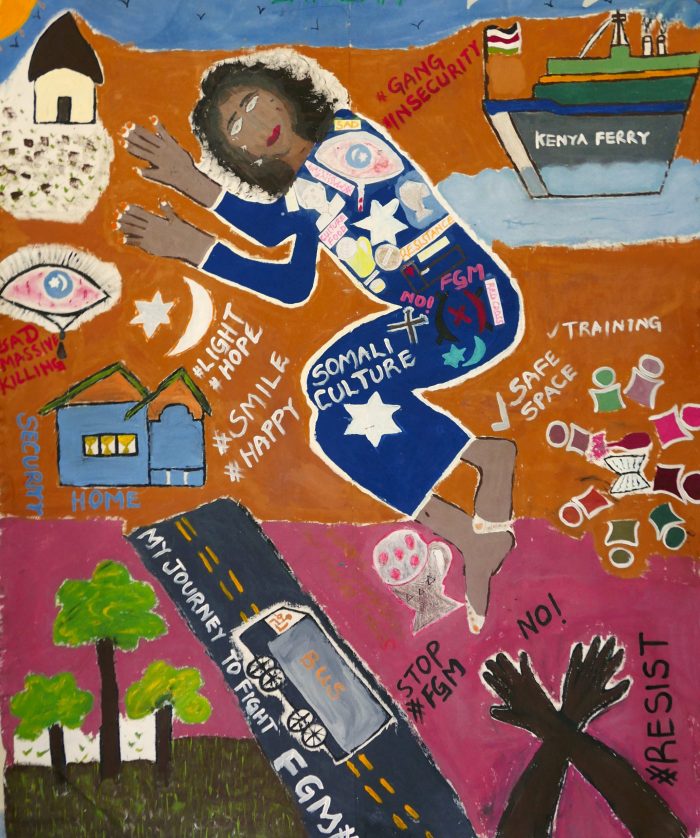 I decided to use the blue and the white stars to represent my Somali culture. This is a Somali flag and we relate it to our culture. When someone looks at my painting, they will realize this is by someone from Somali origins.
The hut is the place in Wajir where FGM is practiced. I colored it dark because I believe that is a dark place. I also decided to use some cream and white colors to symbolize hope and light…hope that at least we can find ways to change the community and in doing this so there is hope that even if it happened to you maybe you can stop it from happening to others. From what I went through with FGM, I do not want any other person to go through this. Wajir is really hot that’s why I decided to put the sun next to the hut.
The eye with teardrops with the red inside it, symbolizes the massive killings like the one in Garisa University. Years back, Al-Shabaab came and attacked Garisa University and many people lost their lives there. Somalis also fight with other Somalis from different clans. Like the Dagodi and Kalafort they are rivals, they fight each other so that there is time they were using a lot of force. So they would come knock on your door when you just open the door they stab you. Many people lost their loved ones this way too. This also about Al-Shabaab. My cousin was brainwashed at the mosque. He was convinced by these people with Muslim Da’wah to go and fight. My cousin was at that age where he finished his Form Four and he wanted a job. He is a man and a first-born and he really wanted to have a job, to earn his own money and to help his mother and his family. He felt he never got the support he needed in Kenya so when these people came they brainwashed him and he accepted because he thought that he was going to get a lot of money. My cousin went there with a friend and they both ended up running away from Al-Shabaab. We never heard anything from them after that until 2018 when his friend came back to Kenya alone. He approached my aunt to tell her that her son is no more. He was killed by Al-Shabaab on their way back to Kenya. This wasn’t his expectation. All he wanted was to have a job and money. So it was really sad. The crying eye with sadness is about all these merciless killings. But there is still light and hope inside it. We still have hope that maybe one day the Somali community will stop fighting with their fellow clans, maybe the Al-Shabaab will end and we smile and be happy.
This is a road heading home. Here I was thinking that this place is not safe for me as a Somali. I decided to draw a bus. The bus is not a safe place for me because on my way home, I could be stopped by the police 10 or 15 times at different checkpoints. You come with your birth certificate, and ID just to show that you are a Kenyan but being a Somali, this is not enough for them to accept that you are a Kenyan. I think they have that idea that every Somali is an Al-Shabaab or maybe a spy. You are not comfortable in the bus journey but you are just seated thinking of the next police checkpoint. I feel it is not safe that they are judging me for being a Somali. I really want people to know that Al-Shabaab doesn’t only consists of Somalis but of people from other tribes too like the Kikuyus, the Kambas etc. Two weeks ago, I was going to South Coast by car. We had reached a police check so the police told us to stop. I was wearing the abaya and the Niqab. The police officer opened the door looked and he commanded me to show him my ID and to step down from the car. I asked him why you are asking me why not ask each one of us to show their IDs? Is it because of my attire? He responded to me how will we know that this driver is not transporting Al-Shabaab? Do you want to finish us all? I felt bad.

I wrote my journey to fight FGM in white to symbolize that back home when I go there I want to stop FGM and this why I decided to place my hand crossed and to wrote No and Stop FGM to show that I resist violent extremism. FGM was done to me but I really want to fight it not to happen to my kids or to any girl from my community or any other community. I really want to fight it
This is a burner. In the Somali community, we use it to smell nice. You can put it on your clothes, yourself, your hair or even in the house for it to smell good.
The safe space is about trainings and workshops like this one where can feel safe to open up without being judged. You know when I was given this canvas to draw, I was like I don’t know how to draw what I experienced what I went through. Putting it down on paper really helped me.
The Kenyan Ferry is to symbolize insecurity. The Kenyan Ferry is where you meet different kinds of people: good people like the pastor, the sheikh and others and the bad people like members of gangs. It is not safe there anymore.
Inside the body is the Somali culture. That is gold I drew a chain and earrings. In the Somali community and culture if you want to gift somebody especially on the wedding day they use gold they prefer gold. The eye there I placed it on the heart because it symbolizes hurting and pain. There is also the Somali food: the camel milk, anjera on a plate and nyirnyir (camel meat) in a bowel.
The red cross and the grave is about FGM. I have put No, the resist sign, and the Red Cross and I have written here stop FGM. The grave is because in the North Eastern there is a high rate of people dying because of FGM. What happens is that when they chop everything, girls end up bleeding heavily and losing a lot of blood and many die.