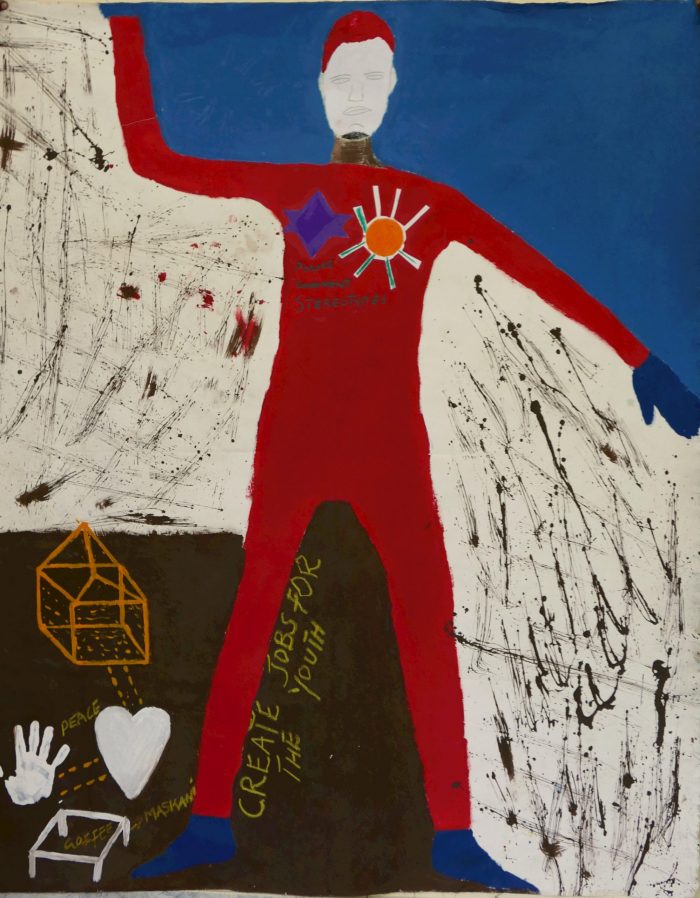 At the lower side of my painting, outside my body, this is my home area, Bamburi. I drew a house connected to a heart to express love. There are people and a table representing where people sit, drink coffee and discuss issues. So most of the people are close and there is love in between the people. That is why in Bamburi there have been minimal cases of gangs. So, as you can see I have connected them, the people, my home, our family, in a way that I feel the sense of belonging. I feel there is peace. I used white because it symbolizes peace.
The yellow colour and the house symbolizes a happy home. The house also symbolizes my parents. They played their role. Most of the people that are radicalized into gangs are in some way encouraged by their parents. I think they do encourage because may be the mother is told your son has stolen something, but she does not warn him or do anything so they think its okay. The mother doesn’t want to ask where did you get the money from. When I bring something home, my parents always ask me where it is from, because I do not work. They will ask many questions and they will take action. They are strict.
Around coffee, people of all sorts and ages meet and share wisdom, every tribe does. Coffee is very important as it brings people together. After morning prayers, one goes there for a cup, then go back home. When going to work you pass there. Going there to me has got a lot to do with resistance. Because most of the people there are older and they don’t support violent extremism. When you sit with them, they tend to advice you, telling you about the people to stay away from, those who are not good people.
This is a sign telling someone to stop, ‘Stop Police Brutality’. I have experienced it at the University, when there was that strike Police were called to come, then when they came with tear gas, guns, and clubs and started beating people. It was a peaceful strike but then they turned it into a violent one. That puts me off from participating in anything collective in the University. So, it really hinders people from speaking up. They are showing you that they have the power and you have nothing.
I wrote ‘create jobs for the Youth’ because there are many graduates, with degrees without jobs. The Government encouraged the youth to study for but after the graduate they can’t be given the life they want. So, it is really hard. You look for job, you don’t get them. Instead, you are asked who do you know? If you don’t know anybody you’ll stay at home. It really hurts. If someone went to school to learn something then, create the opportunity for them. There are opportunities in Kenya but it is just that there is so much corruption, tribalism and nepotism.